A Reflection On Mug Shots by Erica Bryant 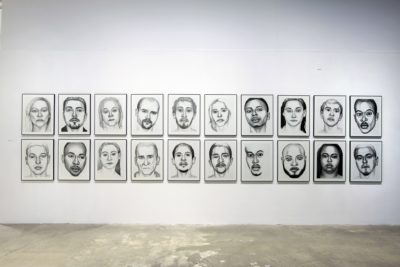 Mug shot is a casual term for a police booking photograph. The suspect is set against a bare background as portraits of the head and shoulders are taken. In the first the suspect looks straight at the camera. In the next he or she faces the side.

Periodically, Crime Stoppers prints about 15 of these photos, stacked in rows, in the newspaper. Law enforcement officers hope that this Fugitive Flyer will cause people to recognize criminal suspects and parole or probation violators. Rewards are offered for tips leading to arrests. The 2016, Crime Stoppers Fugitive Flyer advertised 86 fugitives in Monroe County. Of them, 68 were apprehended.

Mug shots are evidence of arrest and indicate only that a person is suspected of committing a crime. They are not evidence of guilt or even that a crime has been committed. Despite the rights conferred by due process, the mug shot has become visual shorthand for criminality. Psychology studies have shown that mug shots prejudice people against their subjects. The portraits, which were standardized by French law enforcement officer Alphonse Bertillion in the 1800s, make people “look” like criminals.

This unfair association gives these photographs a value beyond the criminal justice system and they are widely disseminated for economic purposes. News organizations have long capitalized on the availability of mug shots and people’s attraction to images relating to crime. Fear is known to attract viewers and readers. Due to long-standing ingrained and insidious racist stereotypes, images of certain criminal suspects are scarier to the general public– and therefore more profitable-- than others.

A 2014 Media Matters for America study of crime coverage in New York City showed that every major network station disproportionately focused its crime coverage on black suspects. This resulted in news broadcasts that exaggerated the proportion of black people who were accused of crime by 24 percentage points.

A disproportionately high diet of African American mug shots feeds the pernicious stereotype that black people are criminals and dangerous. This has disastrous effects in law enforcement, employment and other areas of life. Kabir Alli, a young African American man, made international news in 2016 after tweeting a video that showed the difference in a Google Images search for the phrases “three black teenagers” and “three white teenagers.”

The search for “three black teenagers” yielded mug shots. When he searched for “three white teenagers” Google provided images of smiling youth holding sports equipment or laughing with friends. Google faced outrage over the discrepancy. A spokesperson blamed society, saying that search results are determined by an algorithm that only reflects the content that people put online. “This is fundamentally a societal problem,” the company’s statement read. “There are persistent and problematic biases, and they’re pervasive in the media, on the web…these search results do not reflect Google’s view on the matter.”

Mug shot publishing websites capitalize on the assumptions and shame surrounding mug shots. These sites, of which there are dozens, sometimes announce in capital letters that “CRIMINAL CHARGES ARE MERELY ACCUSATIONS. A DEFENDANT IS PRESUMED INNOCENT UNLESS PROVEN GUILTY AND CONVICTED.”

If the general public truly presumed the subjects of mug shots to be innocent, it is unlikely that the online mug shot publishing industry would continue to attract millions of users. This traffic enables site owners to make money presenting advertisements to the millions of people who visit the sites and from people willing to pay to have their own mug shots removed from the view of these visitors.

Over the years, many people have tried to stop law enforcement from releasing mug shots. More than once, the U.S. Supreme Court has ruled that they are part of the public record and are therefore available under Freedom of Information laws. These images must be left free to play their complicated, loaded role in our visual culture. They may be used to punish crime, exploited for profit or turned into art. - Erica Bryant

This text was commissioned along with our exhibition Witness.

Your ticket for the: A Reflection On Mug Shots by Erica Bryant

A Reflection On Mug Shots by Erica Bryant