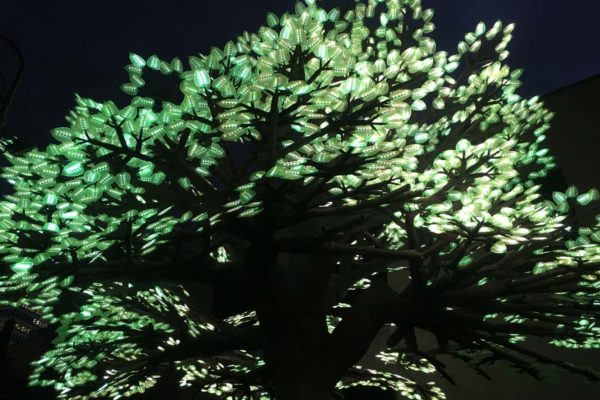 Kalpa is a major new public sculpture by San Francisco based art and design studio Symmetry Labs and lead artist, Alexander Green. The Rochester community has watched the construction of this monumental Public Artwork, and after several delays and many rounds of testing, Kalpa now lights up East Avenue for residents, visitors and art tourists alike. Kalpa is named after the wish-fulfilling, divine tree in Hindu mythology: Kalpavriksha and is a study / artist’s proof for a larger sculpture to be installed in Oslo in Fall 2018 commissioned by major Norwegian art collector and philanthropist Stein Erik Hagen. The first tree sculpture, called Tree of Tenere, was inspired by the most isolated tree on earth and was installed at Burning Man in 2017, the annual Art and Music event in Black Rock Desert Nevada.

Kalpa seems to be both impossibly real and magically alive. During the daytime it appears as a lifelike tree, yet as night falls it comes alive, mesmerizing audiences and passersby alike with thousands of interactive lights that glow with infinite patterns and colors.

RoCo invites the public from across the region to experience Kalpa as a space for contemplation, creativity, and play. The sculpture is installed adjacent to RoCo and presents a nightly illumination from 5pm - 10:30pm. Times will be adjusted as the season changes.

Symmetry Labs and Green have a strong connection to the Electronic Music scene. Much of their work involves connecting aural and visual experiences. RoCo welcomes and encourages musicians, dancers, poets and spoken word artists to engage with the sculpture, activating it on a regular basis. Several concerts are also being planned, syncing light and sound into one immersive experience. An artist talk with Alexander Green will held in partnership with RocGrowth in early September, date TBA.

Kalpa and Tree of Ténéré are part of Not of this Earth, a collection of sculptures that investigates a world where plants evolved sentience before hominids. Communicating with each other and their surroundings via light and sound, sensing the environment around them. Each sculpture is intended to be both naturalistic and surrealistic as the artists explore the boundaries of art, science fiction, technology, and nature. Tree of Ténéré  was named after a famously solitary tree in the southern Sahara desert. Known as the most isolated tree on Earth. The Tree of Ténéré became an important ceremonial gathering place for traders and travelers as they crossed the desert. Kalpa is named after Kalpavriksha also known as The Tree of Life and “World Tree” mentioned in Vedic scriptures. The tree is also said to be the Milky way or the birthplace of the stars Sirius. Kalpa the sculpture will bring light and life to East Avenue each evening June - November.

Alexander Green is an artist and entrepreneur whose work bridges the digital and physical world. Green was trained as a physicist and jazz musician. His work has been featured in the Smithsonian Museum and Stedelijk Museum in Amsterdam, as well as numerous music festivals and concerts around the world. Major Norwegian collector, Stein Erik Hagen, recently commissioned a Symmetry Labs sculpture inspired by Tree of Ténéré. 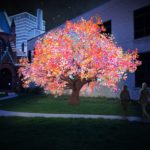 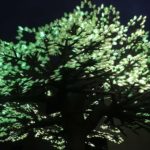 Your ticket for the: Kalpa