Make One, Take One 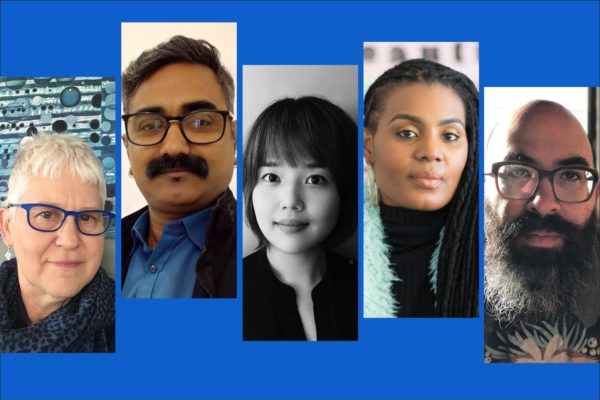 This is a dynamic program about printmaking exchange portfolios and an opportunity to learn about five contemporary approaches to this unique form. This symposium-style event seeks to draw out and amplify the practice of the printmaking portfolio, underscoring its function as a means for creating cultural exchange, artistic support networks, and innovation in printmaking. There will be five short illustrated presentations, each discussing a portfolio or portfolio project, its concept and structure, and its contribution to the printmaking community. Speakers include:

Rajesh Pullarwar (b. 1974 in Nagpur, India) is an artist-printmaker and curator, and equally at ease with paint and mixed-media. He completed BFA (Drawing & Painting) and MFA (Printmaking) in first class from Sir J. J. School of Art, Mumbai in 2000 and 2002 respectively and was awarded the ‘Most Promising Artist of the Year’ in 2005 by National Gallery of Modern Art, Mumbai. As founder and director of International Print Exchange Programme (IPEP), India, he attempts to bring together artists, curators and writers at various stages of their careers on an equal aesthetic footing, irrespective of their works’ commercial value.

Gregory Santos (b. 1979, New York) is an abstract artist and professional printer specializing in lithography and screen printing. His art is an exploration of elemental, emotional, societal, intimate, and physical relationships. Gregory is currently the Printmaking Director at Art Gym Denver and served as the Chair of Mo'Print from 2016-2020. He created the Mixed Grit print trade in 2019 and through this unique project he is printing stone lithographs for artists across the country. He completed the Printer Training Program at the Tamarind Institute and holds an MA from New York University as well as a BFA in printmaking from Syracuse University.

Mizin Shin was born and raised in South Korea. She graduated from Hong-ik University with a B.F.A in Printmaking and received her M.F.A from SUNY at Buffalo. She is currently a Visiting Assistant Professor in the Department of Art & Art History at the University of Rochester. Shin's work has been shown regionally and nationally at institutions across the United States. She was awarded the 2017 Graduate Student Fellowship from Southern Graphics Council International, as well as the juror's award at Brand 45 Works on Paper. Leading numerous printmaking workshops with a number of art organizations, Shin focuses on both traditional and contemporary printmaking practices to promote a multidisciplinary approach to the medium. Mizin Shin is a co-founder of Mirabo Press in Buffalo, NY and vice president of the Print Club of Rochester.

Tanekeya Word was born in the Mississippi Delta and those memories are rooted within her praxis. She earned a BA in English and Afro-American Studies, 2006, from Howard University and studied Painting under James Phillips of AfriCOBRA. Word has a MA in Arts Management, 2011, with a concentration in Visual Arts and Development from American University. Tanekeya completed her doctoral program courses in May 2019 and is currently an Urban Education PhD dissertator with a specialization in Critical Race Theory in Art Education. A womanist, her work heavily focuses on Black geographies/Black Women Geographies. Word’s practice samples the past, remixes the present, and re-imagines the future of Blackness through the lens of Black girlhood and womanhood. Tanekeya Word is based in Milwaukee, WI and is the founder of Black Women of Print and the owner and sole operator of Womanist Press Studio.

Register for Exhibition: Make One, Take One

Your ticket for the: Make One, Take One

Make One, Take One