Makers & Mentors highlights the importance of art education in Western/Central New York and celebrates the artwork and influence of the region’s most accomplished artists. The exhibition series features late career artists exhibiting alongside their former students, many of whom are now educators themselves. Makers & Mentors 2020 features the work of Joy Adams with former students, Duane Slick and Lin Price. Duane Slick’s artwork is presented in partnership with Ganondagan State Historic Site and the Friends of Ganondagan.

Joy Adams (b. England) studied at R.I.T. and graduated from Brockport State University. In 1979, she was awarded a scholarship from the Maryland Institute School of Graduate Painting in Baltimore. She studied under painter Grace Hartigan and sculptor Salvatore Scarpitta and received her MFA in 1981. Adams became a tenured professor of art at Ithaca College in 1990, and retired from teaching in 2006 in order to follow her painting career more freely. She received the distinguished status of Emeritus Professor in 2007. Adams has shown her work in many invitational and solo gallery exhibitions. Venues of significance include The New Museum, NYC; The Alternative Museum, NYC; The Albright Knox Museum, Buffalo; The Everson Museum, Syracuse; The NY State University at Oswego; The Memorial Art Gallery, Rochester. Her paintings have also received several awards of merit and have been exhibited in commercial galleries, including the AXOM Gallery in Rochester, where her paintings have found homes in numerous private and public collections. Joy Adams has lectured at these and other venues.

Lin Price (Ithaca, NY) teaches painting and drawing at Ithaca College. Price received a BFA from Ithaca College and an MFA in painting from Bard College, Milton Avery Graduate School of the Arts in Annandale, New York. Her solo exhibitions include AXOM Gallery, Rochester; The Buffalo Arts Studio in Buffalo; Dowd Gallery at SUNY Cortland; and SUNY Onondaga, Syracuse; Houghton Gallery/121 Cedar Arts, Corning; and Hartell Gallery, Cornell University, Ithaca. Price has also shown in invitational and small group exhibitions, at venues including Blue Mountain Gallery, NYC; Silverman Gallery, Montgomery College, Rockville, MD; Munson-Williams-Proctor Art Institute/Museum in Utica, NY; and XL Projects in Syracuse, NY, among others. Price’s work can be found in the collections of the Munson-Williams-Proctor Art Institute and numerous private collections. She has received several awards, such as an SOS grant from the New York Foundation for the Arts; New York State Council on the Arts Fellowship through CAP in Tompkins County, NY; Cornell Council on the Arts grant; and the Elaine DeKooning Memorial Scholarship, Bard College. Price has been a resident artist at the Saltonstall Foundation and is an alumna of the New York Foundation for the Arts/MARK program.

Duane Slick (b. Waterloo, IA) is of Native American descent, a member of the Meskwaki Nation of Iowa, and his mother from the Ho-Chunk Nation of Nebraska. He earned his BFA from the University of Northern Iowa and his MFA from the University of California, Davis. He also attended the Skowhegan School of Painting and Sculpture. He has taught at the Institute of American Indian Arts in Santa Fe and is now a Professor of Painting at the Rhode Island School of Design. Slick's acrylic paintings blend the subjects of oral and visual Native American traditions with a focus on trickster strategies and modernist/post-modernist painting histories. He is the recipient of grants from the Joan Mitchell Foundation, the Rockefeller Foundation, and the School of Advanced Research on the Human Experience in Santa Fe. Most recently, he received a research grant from the Andrew Mellon Foundation with collaborator and Washington University alum Martin Smick. Slick has lectured at colleges and universities across the US and his work has been exhibited widely. Through Fall 2021, his work is on view in a group exhibition entitled Stretching the Canvas: Eight Decades of Native Painting at the National Museum of the American Indian in NYC. 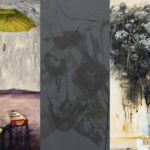 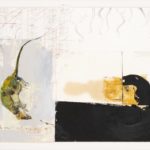 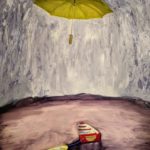 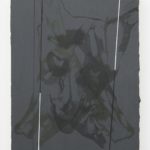