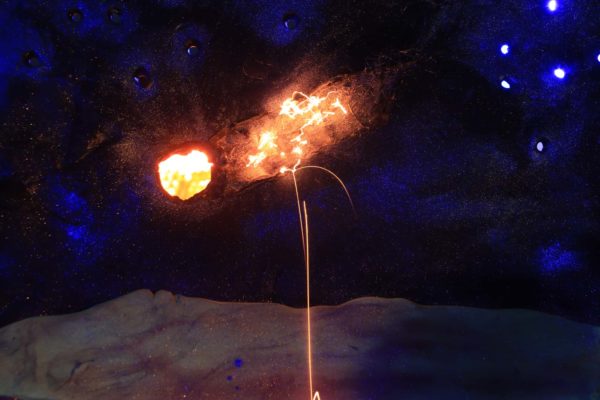 **Princess (Alexis Gideon and Michael O’Neill) will debut their new project Out There at RoCo March 19, 7-9pm.

Combining installation, music, video, performance, animation, clay reliefs, and paintings on glass, The Comet and the Glacier is a meditation on memory as a creative act. It  premiered at Locust Projects in Miami November 19th, 2016 as a multi-media performance piece with an accompanying four-channel video installation.

The Crumbling is a 21-minute stop-motion animation video opera set in a dream-like mythic town following the trials of an apprentice librarian as she tries to save her city from crumbling down around her.  The piece explores the importance of word and symbol in a decaying culture, as well as the marginalization and persecution of people based on heritage, gender, race or belief, and all that is lost in such persecution.  The Crumbling takes a modern and innovative form, while drawing from ancient texts and esoterica such as the Kabbalah, the Hermetic Philosophy of ancient Egypt, the mystical beliefs of Hildegard von Bingen, Alchemy of the 16th Century, and the mid 19th Century occult beliefs of the Hermetic Brotherhood of Luxor.

Alexis Gideon (b. 1980, New York City, NY) is an American visual artist, composer and performer, best known for his innovative animated live video operas and multidisciplinary techniques. Gideon graduated from LaGuardia High School of Music & Art and Performing Arts (Manhattan) in 1999 and received a BA in Musical Composition and Performance, Wesleyan University in 2003. Alexis, whose career began under the mentorship of musical legend Anthony Braxton, considers music the backbone and inspiration for all his work. Critic Alex Oliver writes, “It’s hard to know whether Gideon views [his pieces] as an occasion for the music, or whether the music is the midwife of the experience. Gesamtkunstwerk is achieved.”

Combining research, literature, musical composition, painting, sculpture, installation, video, and performance, Gideon's work examines the loss of the mystical in contemporary society. Alienation, subjugation and the human condition are persistent themes in the artist’s work. In 2013, the New Museum of Contemporary art paired Gideon with William Kentridge in a joint exhibition that explored spiritual and political colonialism.

The work has been translated into French, Spanish, German, Italian and Chinese. It has been adopted into Oregon State University’s Chinese Cultural Studies curriculum and selected by in the Borges Center (University of Pittsburgh) In the Arts collection. Gideon has been an art juror at the Cleveland Institute of Art, a guest artist at Carnegie Mellon University MFA Integrative Seminar, and lecturer at SUNY Stoney Brook, Kawenga Digital Arts and Culture Center (Montpellier, France), Washington State University, University of New Mexico (Albuquerque), University of Oklahoma (Tulsa), and the Portland Art Museum. 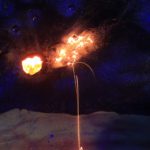 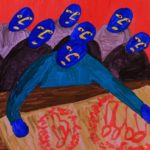 Your ticket for the: Mystical Videos by Alexis Gideon