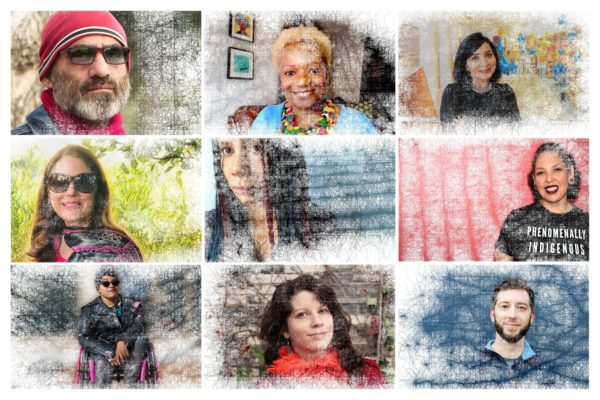 Opening Reception: April 1, 6-9pm
*The curator of the archive, Mara Ahmed, will give a brief talk at 6:30pm

Released in collaboration with RoCo starting March 2021, The Warp & Weft is an online audio archive created and curated by interdisciplinary artist Mara Ahmed. It is a collection of stories from the first year of the pandemic that weaves together diverse voices, languages and geographies. The Warp & Weft hoped to go beyond politics and explore the human family’s preoccupations and imaginaries, at a time of isolation and upheaval. Now a year later, with the coronavirus still with us and the world knit together as tightly as ever, we revisit the archive as a multimedia exhibition The Warp & Weft [Face to Face].

What have we learned over the past year? Why have vaccines and better treatment protocols not overcome the virus? Are we addressing local and global gaps between the haves and have-nots? Has pushback against unjust economic systems, border regimes, and health inequities led to some victories? Have social media and digital culture helped us see and hear one another better? Visit The Warp & Weft [Face to Face] at RoCo and immerse yourself in a colorful tapestry of stories. You can social distance, yet walk through the material expression of the archive and experience the beauty of human ideas and kinship.

*The Warp & Weft stories will begin each day at 12pm. The full program is 4 hours, 14 minutes and loops. The following schedule and times are provided to help you time your visit. Please arrive early. *RoCo is open Wed. - Sun. 12-5pm, Fri. 12-9pm

12:00pm; 4:14pm; and 8:28pm on Fri. only
My Story by Lauren Jimerson
My Love Affair with Food by Debora McDell-Hernandez
Black Futures Matter by Quajay Donnell
My Children: Where My Soul Finds Peace by Alma Omerhodzic
Language is my Land, my Identity by Tania Day-Magallon
Celebrate With Me by Erica Bryant
Time Travelers by Charlotte Clarke
A Cover Story by Darien Lamen
Because Every Goliath Meets Its David by Selena Fleming
If Mountains Were Oceans by Akmal Hanan
COVID Rebirth by Annette Ramos
Gertrud by Renate Debrun

1:05pm; and 5:19pm on Fri. only
Harsher Than War by Ashwaq Abualoof
Pay It Forward by Kaddijatou Fatty
Wistful While I Work by Amra Jamal-Ahmad
Our Body is Trying to Heal by Mike Boucher
An Identity in Tendrils by Shadia Heenan Nilforoush
Risk by Luticha Andre Doucette
Coronavirus, the epidemic at our doorstep by Pascale Lorette
It’s About The Touch by Roberta Schwartz
My Story In My Own Words by Fabeha Fazal
Consolation in Isolation by Allyson Perkins

2:03pm; and 6:17pm on Fri. only
A Moral Reckoning by Nathaniel Baldo
February 2020: On Fire by Shirly Bahar
At Cathedral Grove: A Treatise on Vanishing by Deema K. Shehabi
The Purpose of Life by Ayesha Javed
The Right Words by Cathy Salibian
If A Tree Falls In The Forest by Shamoun Murtza
MMXX: Strange Times by Noelle Evans
Just Some Thoughts by Surbhi Dewan
My Spark Bird by Kalsoom Saleem
Rupture and Repair By Ian Layton
Hello Baby, Welcome To A Whole New World by Nabeeha Chaudhary

3:04pm; and 7:18pm on Fri. only)
Babou by Sabine Lebrun
Connectedness by Mara Ahmed
Connection, Isolation, and Imagination by Arseniy Gutnik
Fall Theatrics by Roja
Bad Monk by Katherine Denison
This River by Zoë Lawlor
Change Starts With Me by Yvonne Colton
What Makes Us Who We Are by Gulrukh Syed
The Open Road – Discovery, Freedom and Healing by Saira Murtza
The End of Isolation/Introspection Extrospection by Rajesh Barnabas

4:01pm; and 8:15pm on Fri. only)
A Life in Theater by Rose Pasquarello Beauchamp
My More-Than-Friend by Paul Couturiau

About the Creator & Curator

Mara Ahmed is an interdisciplinary artist and activist filmmaker. She was born in Lahore and educated in Belgium, Pakistan, and the United States. She has master’s degrees in Business Administration and Economics. She studied art at Nazareth College, and film at the Visual Studies Workshop and the Rochester Institute of Technology. Mara's artwork has been exhibited at galleries in New York and California. Her documentaries have been broadcast on PBS and screened at international film festivals.

Her first film, The Muslims I Know, premiered at the Dryden Theatre, George Eastman Museum, in 2008 and started a dialogue between American Muslims and people of other faiths. Her second film, Pakistan One on One (2011), is a broad survey of public opinion about America, shot entirely in Lahore. Mara’s third film, A Thin Wall (2015), explores the partition of India and possibilities of reconciliation. It premiered at the Bradford Literature Festival, won a Special Jury Prize at the Amsterdam Film Festival, and was acquired by MUBI India.

Mara is interested in dialogue across both physical and psychological boundaries. In 2017, she gave a Tedx talk about the meaning of borders and nationalism entitled "The edges that blur.” She is now working on The Injured Body, a film about racism in America, focusing exclusively on the voices of women of color. Mara is honored to be one of the featured changemakers in RMSC's exhibit, The Changemakers: Rochester Women Who Changed the World. Her production company is Neelum Films.

Register for Exhibition: The Warp & Weft [ Face to Face ]