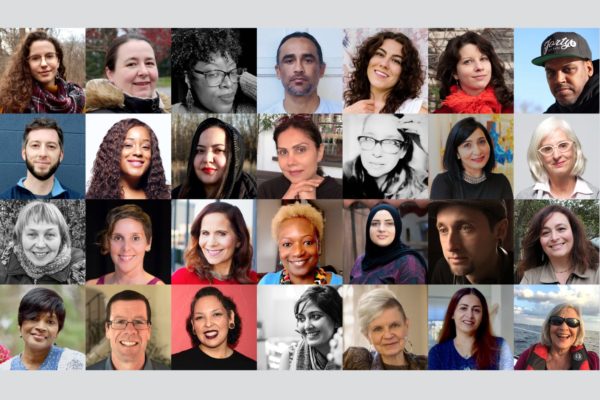 The Warp & Weft is a multilingual archive of stories that seeks to capture the 2020 zeitgeist. It is oral storytelling drawn from diverse voices, languages and geographies, at a moment when the world came to a grinding halt. It goes beyond politics and explores the human family’s preoccupations and imaginaries. At a time of widening inequities exposed by the COVID-19 pandemic, racial capitalism’s failure to address human and environmental needs, but also global pushback against systems of oppression and violence, the Warp & Weft hopes to weave an alternative communal tapestry. The Warp & Weft is organized and curated by Mara Ahmed, with audio engineering by Anand Prakash and web design by Isabelle Bartter.

A set of new stories and audio recordings will be released each week via RoCo and Mara Ahmed’s social media. This program runs along with RoCo’s exhibitions Last Year on Earth and Through The Cracks. Learn more about The Warp & Weft on Art Blooms.

Mara Ahmed is an interdisciplinary artist and activist filmmaker. She was born in Lahore and educated in Belgium, Pakistan, and the United States. She has master’s degrees in Business Administration and Economics. She studied art at Nazareth College, and film at the Visual Studies Workshop and the Rochester Institute of Technology. Mara's artwork has been exhibited at galleries in New York and California. Her documentaries have been broadcast on PBS and screened at international film festivals.

Her first film, The Muslims I Know, premiered at the Dryden Theatre, George Eastman Museum, in 2008 and started a dialogue between American Muslims and people of other faiths. Her second film, Pakistan One on One (2011), is a broad survey of public opinion about America, shot entirely in Lahore. Mara’s third film, A Thin Wall (2015), explores the partition of India and possibilities of reconciliation. It premiered at the Bradford Literature Festival, won a Special Jury Prize at the Amsterdam Film Festival, and was recently acquired by MUBI India.

Mara is interested in dialogue across both physical and psychological boundaries. In 2017, she gave a Tedx talk about the meaning of borders and nationalism entitled "The edges that blur.” She is now working on The Injured Body, a film about racism in America, focusing exclusively on the voices of women of color. Mara is honored to be one of the featured changemakers in RMSC's new exhibit, The Changemakers: Rochester Women Who Changed the World. Her production company is Neelum Films.

Register for Exhibition: The Warp & Weft

Your ticket for the: The Warp & Weft