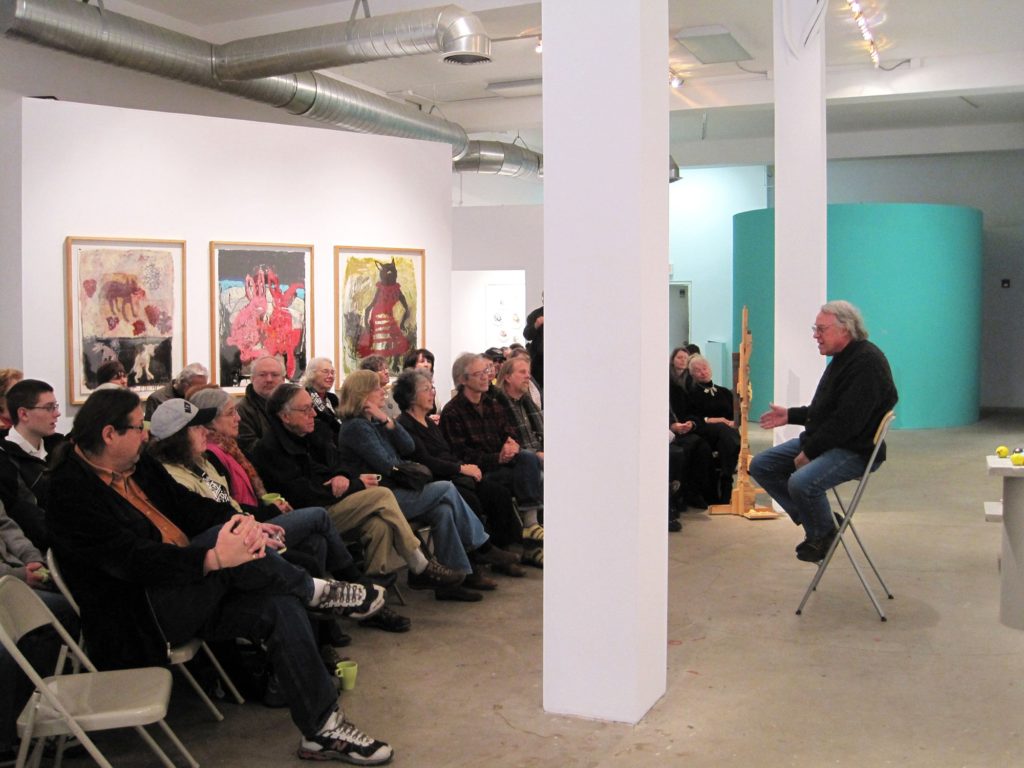 We mourn the loss of Lawrence (Judd) Williams, who passed away on February 25, 2018. A thoughtful artist and influential educator, Williams was a major figure in the Rochester art community. Judd and his late wife Julianna Furlong Williams played a significant role at RoCo and its predecessor, The Pyramid Gallery. Judd served on the Board of Directors and Advisory Board of The Pyramid Gallery, and both artists participated in several group and solo exhibitions. Judd and Julianna exhibited together in Makers & Mentors 2010. More photos of Judd's work can be seen here. Read the obituary here.

Judd was an original. He saw art in everything. Once, addressing the MAG Docents, he described the telephone wires slicing the sky from his train seat window in such a vibrant manner it was thrilling. He knew how to see and and how to have others connect. Judd was a consummate teacher, a kind, genuine and accepting soul.
- Nancy Cole Kelly, former MAG Gallery Store Manager, art collector and friend

To paraphrase the Bard:
"He was an artist, take him for all in all,
We shall not look upon his like again."
- Bob Malone

Lawrence "Judd" Williams. Lawrence was the precise one, creator of detailed drawings, both figurative and abstract. Judd was the playful one, master of the found object, all by itself or manipulated and combined to make you think, to wonder at such simple playfulness and, sometimes, just laugh. Lawrence was private and thoughtful; Judd was relaxed & unabashedly waggish. Both will be missed.
- A friend

Bob Malone and John Tribone and I had lunch with Bill Sellers and Judd not too long ago, and Judd brought his usual wit along. At one point when we were talking about what we were up to he told me that he really liked the concrete box with sounds coming out of it that I had made... I said oh yes, the Box of Sighs....he said yes, that one...paused a bit, then, very seriously, said oh I forgot to ask you...what size was it...?! Ha ha Judd! Thank you for all of you, silly and profound, that we have to remember!We love you Judd! Vaya con Dios!
- Anne Havens

As a friend, Judd was brilliant, witty, and warm. Unassuming as a teacher, he was comfortably soft-spoken. And as an artist he was extraordinarily ingenious and resourceful. His work and life seemed to flow as naturally and productively as a stream. He was bashful when I would suggest how heroic he was for me. Now I must miss both Judd and Julie.
- Ron Richardson