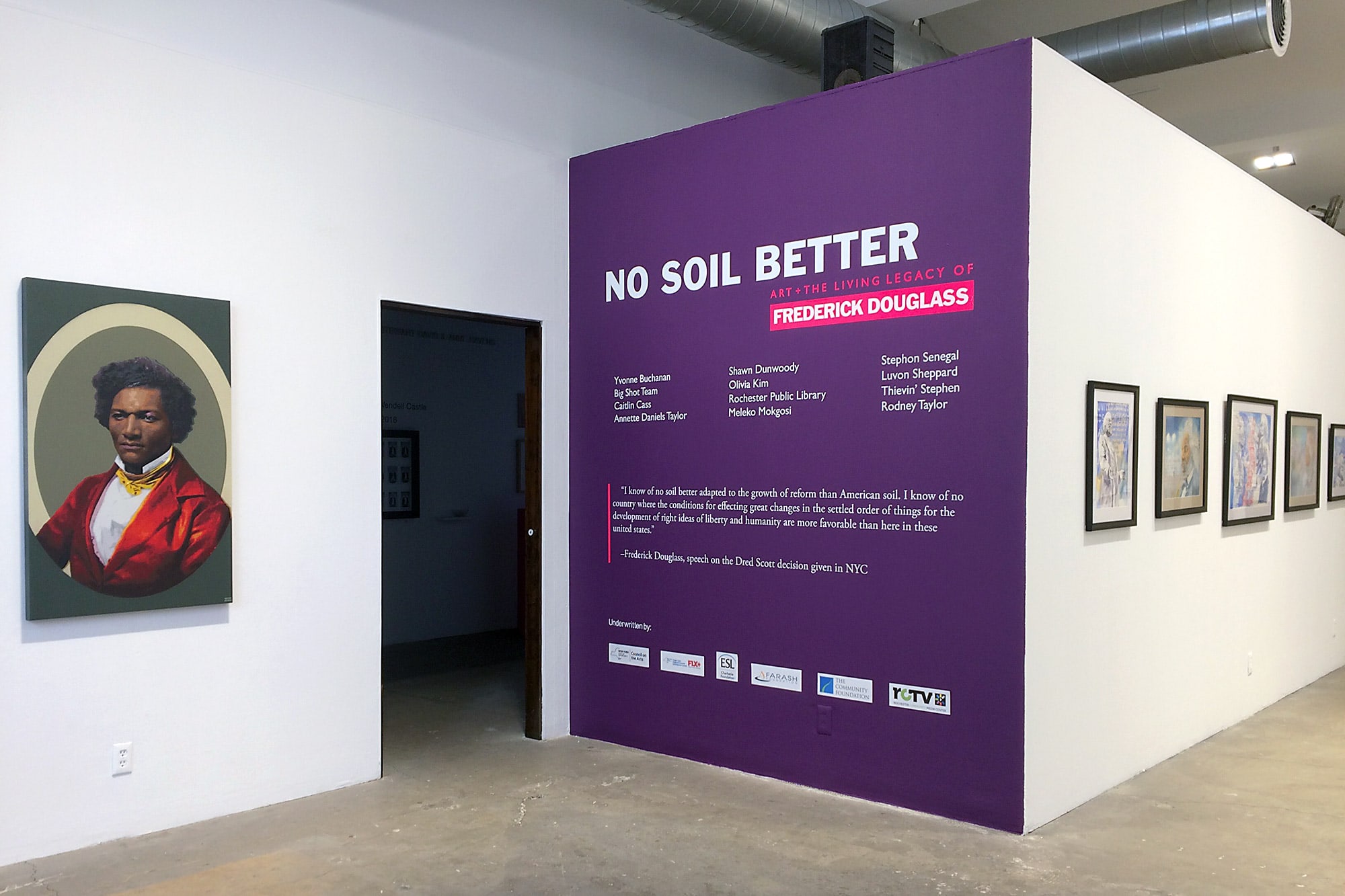 In 2018 our community has come together to celebrate the 200th Birthday of Frederick Douglass. We’ve been inspired by his words and actions, and galvanized by the Stanley Edwards monument (1899) of Douglass. This commanding statue is certainly one of Rochester’s most important artworks. Unknown to many Rochesterians, it is the first public statue dedicated to an African American in the United States.

Rochester Contemporary Art Center’s exhibition, No Soil Better: Art & the Living Legacy of Frederick Douglass looks to the Edwards statue for inspiration. It takes its title from a Douglass quote appearing on the base of the monument. In response to the Dred Scott decision, a major setback for abolitionists, Douglass was confident and encouraging. Despite the current moment, he reminded fellow reformers of the growth and strength of their movement.

“I know of no soil better adapted to the growth of reform than American soil. I know of no country where the conditions for effecting great changes in the settled order of things, for the development of right ideas of liberty and humanity are more favorable than here in these united states.”
–Frederick Douglass, speech on the Dred Scott decision given in NYC, May 1857

The statue has a complex origin story. It was partially funded by many individual donations and even $1000 from the government of Haiti. The monument initially held a prominent place in downtown Rochester where train passengers, pedestrians, and citizens witnessed its power and significance. The Edwards monument of Douglass was originally installed on June 8, 1899, in front of the New York Central Train Station on the corner of St. Paul Street and Central Avenue. Though the original location was a highly visible gateway to the city, as the environment changed and the area became less attractive, the monument was moved to Highland Park near the South Avenue site of Douglass’ home.

Providing the historical framework for this exhibition, The Rochester Public Library presents maps, archival photos, and objects that illustrate its creation and original location. In spring 2018 the monument will be moved to a more visible location where Rochesterians and visitors alike will once again experience its tremendous energy, vitality, and meaning.

This exhibition presents new artworks by a diverse group of emerging and established artists. Their works consider Douglass himself, how he has been memorialized, and the importance of his legacy today.

Meleko Mokgosi’s drawings bring the artist’s textual editing practice to bear on the four monument panels that appear on the Douglass statue plinth. Each of the four large drawings depicts a plaque and layers of historical footnotes, expanded Douglass quotes, and additional biographical information. The artist’s probing questions and thoughtful marginalia offer a complex contemporary update to the original words cast in bronze.

Though Douglass is widely known as the most photographed person of his era, our experiences of his portraits are all limited by the monochromatic daguerreotypes of the day. Rochester-based stencil /street artist Thievin Stephen has gone to great lengths, pushing the limits of stencil technique in his attempt to render Douglass in full color. The artist’s interpretation, Captured in Black and White offers us a new, old look at this great figure.

Olivia Kim and Rodney Taylor channel Douglass through very different metaphors. Kim focuses on Rochester-based dancer and fiber artist, Frances Hare. As the subject of Kim’s large charcoal drawing, Hare represents to the artist the therapeutic potential of movement and all that Douglass fought for. Taylor references one of the most painful final chapters in Douglass’ life in Rochester: the burning of his family home by suspected arson.

Both Stephon Senegal and Luvon Sheppard integrate Douglass’ text into the surface of their work. Senegal’s constructions effortlessly bring together heavy steel and wood with light contemporary type treatments. Sheppard’s floaty and etherial watercolors depict Douglass and his words soaring high with reverence and spirituality.

Yvonne Buchanan’s video, You may rejoice, I must mourn, and adjoining re-drawn map, Douglass in Rochester, ground us for a close listen to Douglass’ powerful and damning speech: “What is the meaning of July Fourth to the Negro?” The artist isolates Douglass’ eloquent and biting critique of celebrating Independence Day at a time when a huge number of people were enslaved in the ‘land of the free.’

Shawn Dunwoody and Caitlin Cass each combine popular and historical visual culture in their works. Dunwoody’s large painting, World Star depicts Douglass’ most dramatic confrontation with “slave breaker” Mr. Covey. The artwork mashes up cultural references and historically significant moments of resistance, packaging it all as a cell phone video still. In her wryly titled, Projections on a Monument, Caitlin Cass has combined animation and a large drawing of the Douglass monument to disarming effect. By focusing solely on the reactions and comments from citizens, friends, and fellow reformers, Cass sketches a more nuanced picture of how the Edwards monument was received in its day.

Ranging from painting to sculpture to video, the artworks included in No Soil Better constitute a contemporary monument to Douglass made by today’s artists. Some reflect quietly on his legacy, others ask serious questions, challenging us to, as Douglass said, “Agitate, Agitate, Agitate!”

Your ticket for the: No Soil Better Intro