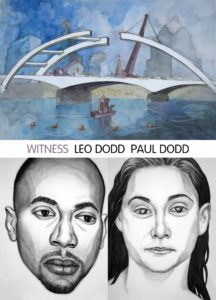 The exhibition includes a selection of 27 paintings by Leo Dodd (1927-2015), completed after his retirement from a career as an engineer. Later in life Leo actively pursued painting and drawing, exploring the many changes taking place in the city of Rochester. He was especially attracted to construction sites and the built environment, rendering these scenes of activity and motion with a great sense of optimism. In his text accompanying the exhibition, Rick Muto mentions that Leo’s paintings, “capture the culture of the region with faithfulness to the occupations and activities of the people that dwell in them. That could be as subtle as a plowed field or as robust as a gathering in the middle of town.”

Since the mid-nineties Paul Dodd has made many portraits of local people. His primary source of images has been the Crime Stoppers page of the Democrat & Chronicle newspaper. Influenced by his brother Mark’s early incarceration for a minor marijuana offense and a later job with the police department handling mug shots, Paul has made hundreds of drawings and paintings of the accused. Considered alone, one of Paul’s portraits can seem removed and neutral; however, his Model from Crime Page project has grown out of compassion: an attempt to see the human behind the crime, beyond the tragedy. As Erica Bryant necessarily points out in her featured essay, “Mug shots are evidence of arrest and indicate only that a person is suspected of committing a crime. They are not evidence of guilt or even that a crime has been committed.”

Just as Leo approached the landscape, sketching and painting a scene many times, so too has Paul maintained an iterative practice through his decades-long meditation on the mug shot. The base gesture behind his repeated efforts: to see these ‘crime faces’ as human portraits, not just records and rap sheets. Of his brother’s work, Mark Dodd wrote:

“Looking at Paul’s paintings based on mug shots always brings up a mix of thoughts and feelings for me ranging from artistic appreciation to memories of personal experience. They’re portraits but not in the usual circumstances, and I see the dignity in all of them, as I’m reminded of my own experience.”

In addition to the provided reading materials related to the visual culture of crime, numerous personal and family documents also accompany the exhibition. Letters, articles and sketchbooks point to the artists’ similar working methods, their significant visual appetite, the lasting impact of a family member’s time in jail, and above all, their commitment to bearing witness.

Your ticket for the: Witness Intro by Bleu Cease