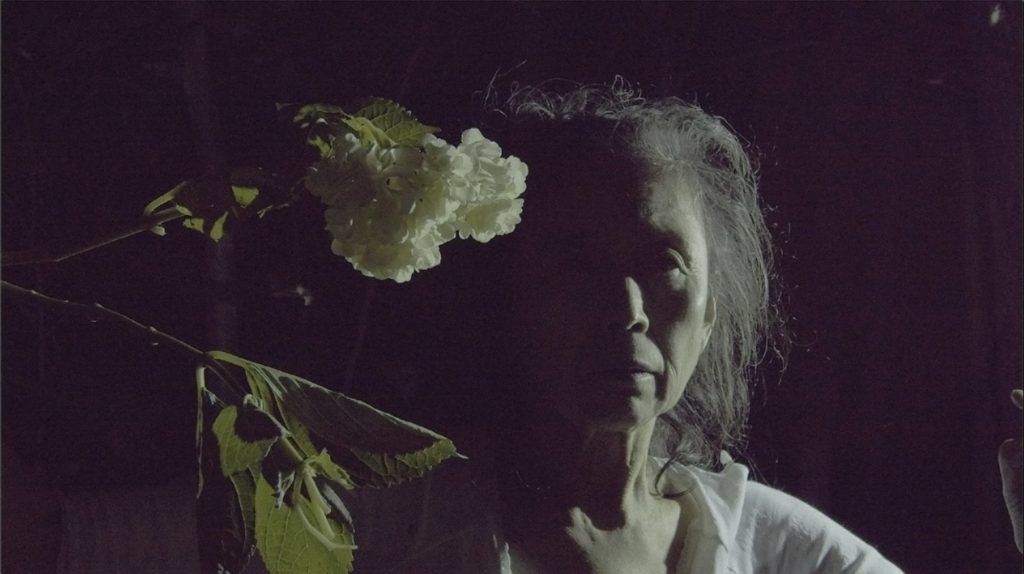 Three pieces are in the exhibition, one a diorama moving-image mystification of the turn of days (Britt Mosley "Sunset"), another a tingling iterative speculation on plant intelligence (Anna Scime "Understory"). And lastly a woman at night dancing with moths, as allegory on the notion that by living, we are under compulsion to one day return to the earth (Eiko Otake "Dancing with Moths").

Much like Daguerre's early landscape dioramas, Britt Mosley's "Sunset" features light and movement in a translucent image.(1) Mosely regulates his fish-tank cinema of attractions using electronics and puppetry. Mosley's mountain landscape is "Alfred Lumpy Slip", a liquefied suspension of clay particles in water. During shooting and seen in the video, the slip settled and grew delicate hairlike structures, the kind of microscopic spaces, that can hold complex reactions, possibly the DNA that led to all living cells.(2)

With the turn of day to night, Eiko Oake's, "Dancing with moths" considers lived-time, marked by days and verified by night. Classical Greek tradition saw the moth as a figure for the psyche departing from the body, and in European folklore, the moth is called 'dead bird".(3) Eiko's expressive Butoh trained gestures, white garment and flower conversing with moths reminds us of our daily cycle of renewal brought by rest and dreams at night.

Next from the human body to the plant body, Anna Scime's “Understory”, poses that native species could be considered "agentic, intentional beings, the mediated plant potentially invites us to develop more caring, attentive, and communicative attitudes toward the vegetal.(4) But Scime's Understory proposes to us the subterranean, cunning vitality within the turn of nutrient cycling. Understory features native bloodroot's beautiful early blooms that lure with pollen and provide no nectar to pollinators and the carefully handled intensity of the plants' blood-red root sap.

This text accompanies the exhibition Earthen.

Your ticket for the: Earthen by Rebekkah Palov