Introduction to The Subway Series by Mark Reigelman II 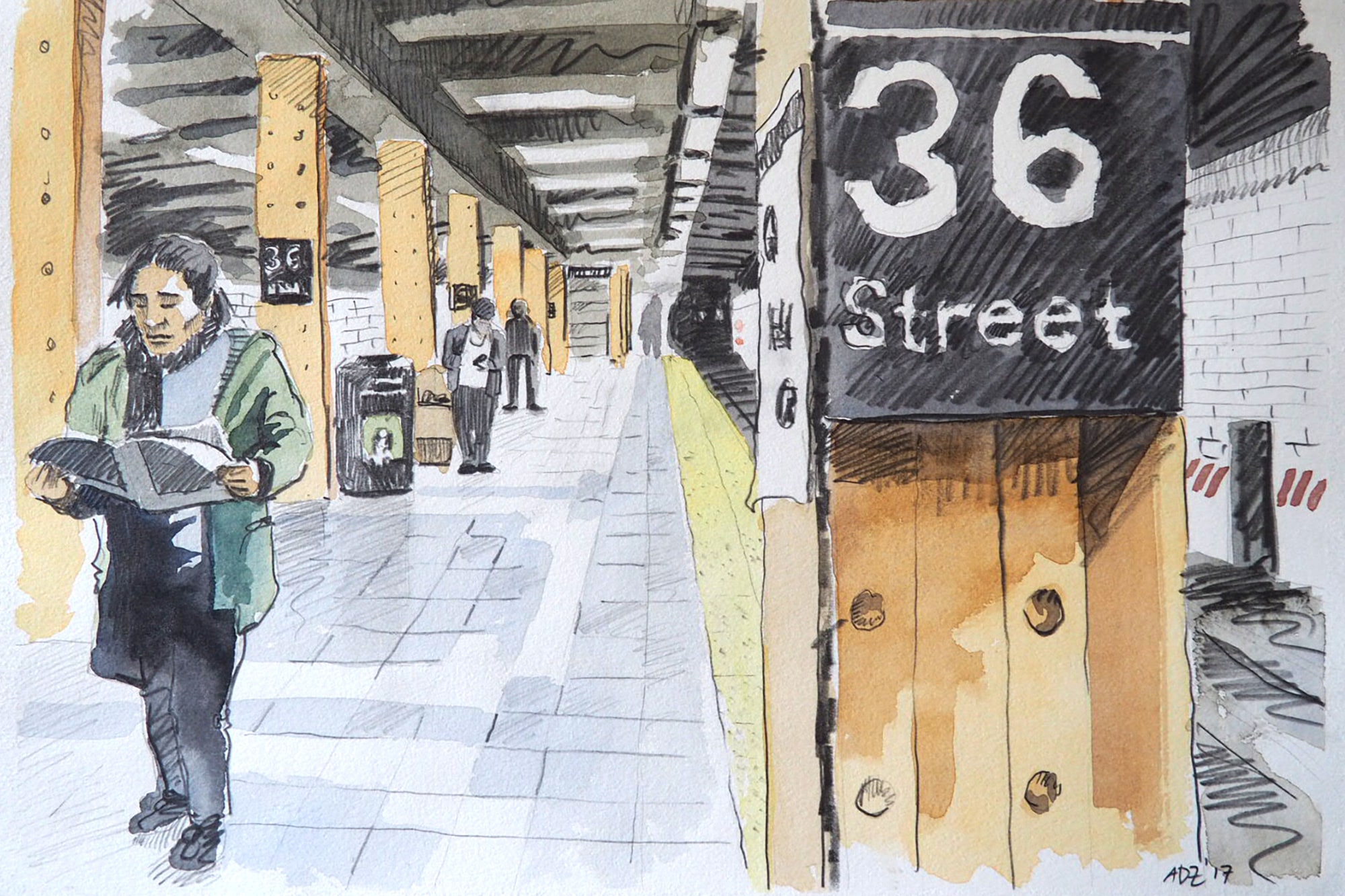 Before, when I dressed from the waist down, I spent each morning rushing to the train. With cat-like agility, I descended 3,000 perilous steps from street level to the subway platform. There, I was rewarded with the scent of urine and dog-sized rats tossing aside poison traps to fight over knives, skittles and cigarette butts. After the winner was announced, I gazed at the flashing lies on the digital arrival-time screens, the wait time increasing with each passing second. About 70 hours later, the shattering screech of rusty wheels on even rustier tracks signaled me to the oncoming deathtrap that was my ride home. As the ribbed metal can, held together by electrical tape and bits of gum, slowly shuttered to a stop, I desperately jockeyed for a good position, elbowing children and the elderly aside. There I waited for the gates of heaven to open. And when they did, I was ready. I made a dash, clambering over and under my fellow passengers, spilling drinks and knocking out teeth all for that one glimmering fiberglass seat. I had won. I could sit, unnoticed, avoiding eye contact with the pregnant, wedged between butts and backpacks and wholly content. Then and for eternity, I would nestle into my luxurious window seat, stare intently at my phone and sway in unison with my comrades as we creaked and zig-zagged below our honorary city.

In his Subway Series, Andrew Zimbelman investigates our collective detachment in what was once the pinnacle of extreme coexistence. Through his sketches, the artist creates a social documentation of public space and explores the reaches of our averted gaze. A smartphone drinks its owner’s face. The act of thumbing a screen becomes a portal of teleportation. In Zimbelman’s series, these poses play out on repeat, heads bowed down in a droning loop of erasure. His subjects live alone, adorned with the glow of Candy Crush, absorbed in the solace of some found world. He captures us detached and unassuming, bestowing us with the negative space of our own making. The Subway Series maps our shared disengagement, revealing a gaze that lacks a place to land.

This text accompanies the exhibition The Subway Series by Andrew Zimbelman.

Reigelman has exhibited work in public sites, galleries and museums across the country. His works, Manifest Destiny! (San Francisco, CA), White Cloud (Cleveland, OH), Wood-Pile (Cleveland, OH), Upriver-Downriver (Louisville, KY) and The Meeting House (Boston, MA) have been recognized by the Americans for the Arts as being amongst the 50 most compelling public works across the country. His newest award winning site-specific installations include Formation at the San Diego International Airport and Sweetwater at the former Domino Sugar Factory site in Williamsburg Brooklyn, NY.

Reigelman has received many prestigious awards including two Windgate Fellowships from the Center of Craft Creativity and Design, the Graue Award from Southern Exposure and the Brownstoner RADD award which recognizes leaders in New York’s Real Estate, Architecture, Design and Development. His work has been included in exhibitions at the Shanghai Museum of Glass, The Cleveland Museum of Art (CMA), The Oklahoma City Museum of Art, The Shelburne Museum, New Britain Museum of American Art, The Fuller Craft Museum, Museum of Arts and Design (MAD) and The Museum of Modern Art (MoMA). French clothing company Lacoste recognized Reigelman as a Cultural Innovator and was described in Details magazine as a “visionary thinker whose work has changed the cultural landscape”. His work has been featured in publications including The New York Times, New York Magazine, Frame (Netherlands), L’uomo Vogue (Italy), Public Design (Korea), Télé Star (France), Details, Interior Design, Sculpture and Public Art Now. Reigelman’s work has been highlighted in books such as Uneven Growth: Tactical Urbanisms for Expanding Megacities (MoMA), Unexpected Art: Serendipitous Installations, Site-Specific Works, and Surprising Interventions (Chronicle Books), Small Homes Grand Living (Gestalten), Pallets 3.0: Remodeled, Reused, Recycled: Architecture + Design (Braun) and Cause and Effect: Visualizing Sustainability (Gestalten).

Reigelman is most proud of being included in the “Coolest Dads of 2019” list by Fatherly Magazine which highlights the 50 coolest dads on earth. In the Innovation category he shared this award with Jordan Peele, Kanye West, Adam Driver and Hugh Herr.

Mark Reigelman studied Sculpture and Industrial Design at the Cleveland Institute of Art in Cleveland, OH and product design at Central Saint Martins University of the Arts in London, UK. The artist lives and works in Brooklyn, New York.

Your ticket for the: Introduction to The Subway Series by Mark Reigelman II

Introduction to The Subway Series by Mark Reigelman II