The Good Samaritans by Larry Ossei-Mensah 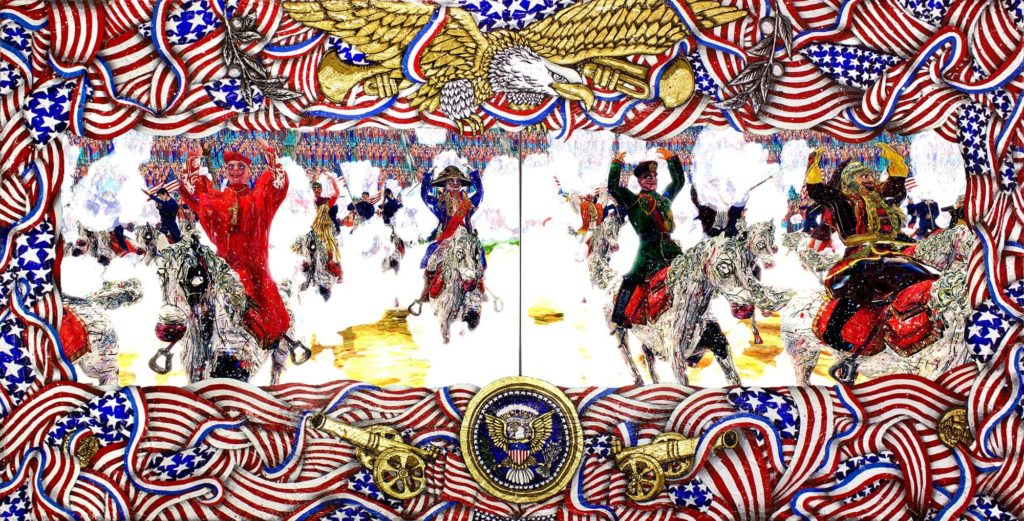 Federico Solmi is a storyteller and satirist who uses his art as a vehicle to stimulate a visceral conversation with his viewers by highlighting the delirium permeating present-day society. Solmi’s work adroitly provokes an complicated discourse about the history of humanity, replete with ludicrous contradictions and false virtues. He employs a variety of media – ranging from 3-D and video game technology, video installations, mechanical sculptures, books, drawings, and paintings — within his practice to construct narratives that vacillate between amusement and disconcertion. The carnivalesque forms that emerge in Solmi’s work become etched into the psyche of his viewers as he critiques the values, attitudes, mythologies, and ideologies that have come to define western society. Capitalism, consumerism, celebrity culture, greed, corruption, systematic oppression, and demagoguery are just a few of the themes Solmi’s latest exhibition The Good Samaritans seeks to excavate. The exhibition features recent videos, installations, and books that are visually seductive and entrancing. Upon deeper inspection, Solmi’s works reveal ridiculous costumes, vivid color palettes, and grotesque imagery offering a nuanced commentary that is designed to subversively coerce the viewer into examining and reconsidering their complicity in the facetiousness of our current moment.

Historically, Samaritans have been referred to as “guardians” or “keepers”, and in the case of Solmi, he seeks to be a keeper of the truth as he tackles notions of historical fact versus fiction in his work. For several years, Solmi has applied a social surrealist approach to art making steeped in satire, and engaging his viewers in an experience overflowing with emotions ranging from entertaining to macabre comedy. Solmi’s ability to disarm his viewer through the aesthetics of animation while unpacking weighty subject matter heightens the impact of his work. The absurdity of the animated image coupled with the deeply political nature of these works is an innovative device that underpins the singularity of Solmi’s practice. No decision is arbitrary, as illustrated by the cinematic score for the video works as evident in The Great Expedition where he conflates traditional European classical music with Native American drums. By applying techniques akin to that employed in first person video games in works such as The Gracious Conquistadors, Solmi immerses his audience into scenes that feel intimate, but aim to implicate them into a dialogue about the current state of affairs in our society. It is through this application that participants are lured into thinking deeply about the issues embedded in Solmi’s oeuvre.

His works project fantastical imagery and identifiable scenarios unconcerned with the fixedness of time while also featuring world leaders of the past and present such as Benito Mussolini, Montezuma, Pope Benedict XVI, Christopher Columbus, Abraham Lincoln, and Donald Trump. The American Fabius takes its title from a nickname granted to George Washington due to the military strategy he employed inspired by Roman statesman Quintus Fabius Maximus Verrucosus. In the video, the first U.S. President is shown with an empty unblinking gaze punctuated by a hauntingly wide grin and devious fangs. As Washington majestically strides on horseback through an adoring crowd of Native Americans to celebratory music and bombastic fireworks, the scene is counterbalanced by desperate cries of a few spectators who can be heard amongst the revelry. The subjects featured in Solmi’s work are placed within a time continuum of leaders who have been deified despite their historic atrocities, lack of empathy, and fallibility. It is this fallibility – along with the hypocrisy and dubious legacies that society, historians, and journalist tend to overlook — that Solmi focuses on in his work as he takes the innocuous and magnifies it to monumental proportions via a dystopian lens.

Federico Solmi strives to make visible the historically inextricable relationships between nation, religion, consumerism, and capitalism. Ceremony, pomp, and circumstance are made grotesque, challenging the customary ideations and performance of nationalism. In The Holy Master, the Pope – surrounded by an ostentatious frame composed of filigree, the Vatican, papal crests, and Christ being crucified — waves from his car as he proceeds through the city in a ceremonial fashion. Manic flights of doves swarm across the screen as the Pope moves through Italian flags, many of which have been emblazoned with the Prada logo. Other ubiquitous corporate behemoths – such as McDonald’s, Louis Vuitton, and the 99 cent store — are referenced in The Kindhearted Charlatans, The Good Samaritans, and The Amiable Despots along with nameless samurai, Catholic cardinals, Roman senators, French queens, and other leaders from around the world and throughout history. By collapsing time and geography in his works, Solmi powerfully underscores the ways in which state power, colonialism, and imperialism have a symbiotic relationship to capitalist ambitions.

By creating art with a contemporary panache – like artistic masters such as Francisco Goya and Diego Velázquez before him — and utilizing satire and storytelling, Solmi candidly chronicles the world as he sees it in an effort to be a Good Samaritan. Constructed with urgency, care and concern for humanity, his works frankly criticize our society by accentuating the beauty and horror that has shaped the psyche, identity, and reality of western culture.

This text accompanies the exhibition The Good Samaritans

Your ticket for the: The Good Samaritans by Larry Ossei-Mensah

The Good Samaritans by Larry Ossei-Mensah