The State of Art Writing 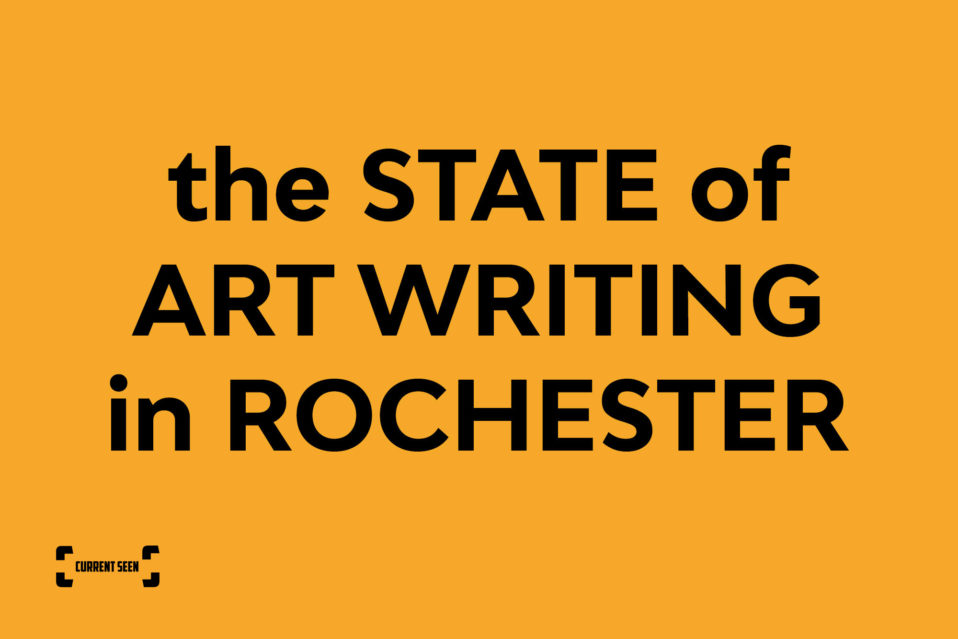 Art writing, reporting and criticism are key components that support a thriving, dynamic art scene. While CITY Newspaper and WXXI warrant considerable praise for their promotion and coverage of the visual arts, there is equally a consensus that the Rochester community deserves and needs more. How could in-depth conversations about the visual arts help advance the current scene, raise awareness and strengthen young artists’ careers? Join us for a lively discussion about the the state of art writing present-day, and the potential future of art writing in Rochester. Moderated by Sarah Webb and featuring the following panelists:

Rebecca Rafferty is an artist and writer living in Rochester, New York. She is the Arts & Entertainment Editor at Rochester CITY Newspaper, where she has written about the arts since 2008. Her work has also appeared in Afterimage: The Journal of Media Arts and Cultural Criticism, Artvoices Magazine, Rochester Insomniac, 12ozProphet Magazine, and other publications.

Colin Dabkowski is a digital editor and reporter at The Buffalo News, where he served as arts critic for 12 years. Before joining The News in 2007, he worked as managing editor at Voice of Witness, a series of oral history books published by McSweeney’s in San Francisco, and as a freelance writer in New Orleans. He is a 2004 graduate of Syracuse University’s S.I. Newhouse School of Public Communications, with a B.S. in magazine journalism. Since October of 2015, he has served as vice president for mobilization of the Buffalo Newspaper Guild.

Robin L. Flanigan grew up among the red rocks of Sedona, Arizona, and launched a writing career in the early ‘90s while living in a Baltimore graveyard. After receiving a bachelor’s degree in language and literature from St. Mary’s College of Maryland, where she studied for a semester at Oxford University’s Centre for Medieval and Renaissance Studies, Robin worked in newsrooms for eleven years. She won several national awards, and as a staffer with the Gannett-owned Democrat and Chronicle received the Dean Gysel award for best newsroom writer as judged by outside editors. In 2005, Robin became a full-time freelance writer for magazines, newspapers, websites, and marketing collateral, and continues to cover the arts for the D&C. Her journalism work has been featured in People magazine, USA Today, US Airways magazine, and elsewhere. Her essays have appeared in The Sun, Motherwell, Talking Writing, and several other literary magazines, as well as two anthologies. The coffee-table book she wrote on the city of Rochester, New York, Rochester: High Performance for 175 Years, was published in 2009.

Karen vanMeenen has been the Editor of the media arts journal Afterimage for more than twenty-five years. She is also a Senior Lecturer in the English Department of Rochester Institute of Technology, teaching courses in writing, literature, and contemporary media art. She edited the collections Giving Sorrow Words: Poems of Strength and Solace; Light At the End: Poems by Lyn Lifshin; and Nevermore: Poetry and Prose by Edgar Allan Poe, and has copyedited several full-length works. She has written for several publications including Art Papers, Art New England, Source: Ireland’s Photographic Review, and the Journal of Applied Arts and Health. She is certified as a writing therapist and serves on the executive board of the National Association for Poetry Therapy and as the Book Reviews Editor for the Journal of Poetry Therapy. vanMeenen has Master of Arts degrees in Transformative Language Arts and in Media Studies, and is completing a PhD program in Philosophy, Art & Critical Thought at the European Graduate School.

Sarah Webb has been active in the Rochester art community over twenty-five years as an independent curator, educator, writer and artist. Most recently, Sarah collaborated with Rome Celli, establishing programming for Rochester Art Collectors.She completed postgraduate work at Christie’s Education, London, and received her MFA from Visual Studies Workshop. Sarah has been on the Board of Directors of the Rochester Contemporary, as well as Pyramid Arts Center; she currently serves on the Board of Trustees for the Monhegan Museum of Art in Maine. Sarah Webb co-edited Singular Women: Writing the Artist (2003 UC Press), a collection of thirteen essays which probe the dilemmas and complexities of writing about the woman artist, past and present.

Register for Event: The State of Art Writing

Your ticket for the: The State of Art Writing

The State of Art Writing